Our peppers are still producing well, so it’s time to preserve some of them. We have been eating fresh peppers for some time and have used some to make salsa. We really like pickled jalapeno peppers and have enough at one time to put up a few pints. Our sweet peppers are doing well and we usually eat them fresh or add them to squash relish. We haven’t preserved any to use during the winter before, but this year we are trying our hand at dehydrating them. 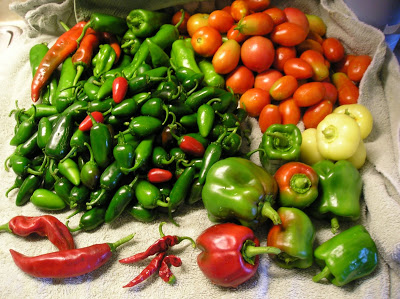 Peppers have some nutrients that are not found in many other foods, so they are good addition as a food storage item.

The jar contains the first batch of dehydrated peppers. It is surprising how little space they take up after they are dried.

water bath canner for 10 minutes. They were really soft and mushy and we didn’t like them well at all. I tried to alter the recipe enough that they wouldn’t be so soft to no avail. Last year I didn’t use the water bath at all. I boiled the vinegar and water, packed the peppers in hot jars, poured on the boiling liquid, put the lids on tightly and covered them with a towel to seal. That worked fine, but we have been rethinking the safety of using that method. With all of that said, here is the latest version of my pickled peppers.

I cut up my peppers (make sure you wear gloves!) a couple of days ago and refrigerated them. This evening after work I had enough time to can them but I didn’t want them to be cold, so I had to figure that into my recipe.


At this point, since my peppers were refrigerator cold, I added them to the boiling liquid and returned them to a boil. 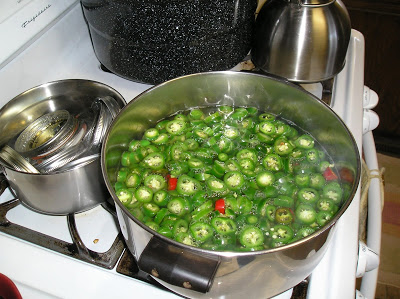 While I was waiting for everything to boil, I decided it would be a good time to start a batch of chevre cheese. We aren’t getting near as much milk right now, but we still had enough to make a batch of cheese. Our favorite way to spice up some of this cheese is with dried onions and salt. Since we are dehydrating some of the peppers I started thinking about how I might use them and this cheese recipe came to mind. We both agree that the dried peppers will be good with the onions, so we will be able to try it out in a few days after the cheese is made. 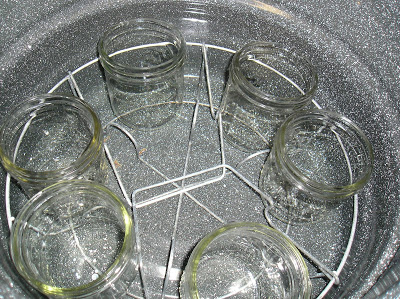 I got an idea from CQ over at Hickory Holler Farm when she shared how she cans up her dill pickles. I think it will improve the safety factor of canning peppers without making them mushy and I thought I would give it a try. While the liquid for the peppers was boiling, I put my lids and rings on to simmer and put my six jars covered in water in the water bath to heat. I let the water bath come to a boil, then turned off

the fire. Then I took out one jar at a time, filled it with peppers and boiling liquid, put the lid and ring on tight, then returned it to the water bath until all of the jars were filled. I did not turn the fire back on under the water bath, but left the jars in the almost boiling water for 10 minutes before I removed them and put them under a heavy towel to cool. I have been rewarded with the sound of pinging lids sealing.

Some days, this time of year, it would be much easier to let the garden go and enjoy a slower pace in the evening after work. But I feel the need to learn more about growing and preserving food for the winter like never before. I feel all we can learn about growing and preserving our own food is a vital skill that will soon make more of a difference in our lives than we ever dreamed. Do your part.

One thought on “Drying and Canning Peppers”