Frank and I have long bought things in bulk. We discovered shortly after we were married and began teaching school that we could buy green beans by the case at Sam’s Club for less per can than buying them separately at the grocery store or even Wal-Mart. Frank assured me when we got married that I would never have to worry about money, and he was right. He has kept that promise for over 30 years now. We’ve always joked that he is one of those men that could get blood out of a turnip. 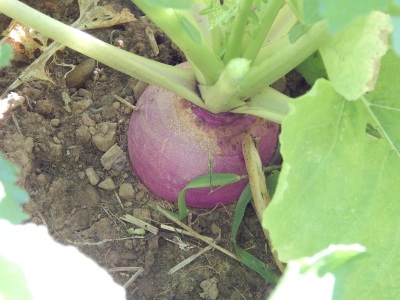 So, what does that have to do with Gamma Seal Lids? Well, prior to going back to Alaska in 2000, we had many dry goods stored in #10 cans. It worked great, but it took up a lot of room, and necessitated a lot of 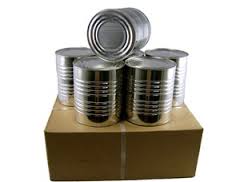 packaging – the cans, a plastic lid to use after can was opened, boxes to organize the cans and make them easier to stack. We had seen many items stored in six gallon buckets with mylar liners and regular bucket lids, but that type of purchasing was out of our price range. We just weren’t willing to pay that much extra for the contents of the bucket. The only thing we stored in buckets at that time was wheat. We had some five gallon buckets of wheat with standard snap down lids.

When we returned from Alaska the summer of 2008, we quickly started stocking up our food storage. We knew the markets were on shaky ground and the housing market was quickly sliding into collapse territory. The need to have as many things on hand in case of a catastrophic collapse was very great. Within a few months of our arrival, we were able to accumulate a decent amount of food that could hold us over until we could, hopefully, produce more. By January we had chickens, goats and plenty of seeds for the new garden spot.

Somewhere along the way, we ran across some Gamma Seal lids. I don’t remember where or why, but we did. We debated storing our dry goods like flour, wheat, beans, rice, etc., in #10 cans again, but the logistics and timing just didn’t fit our current situation. We decided to try five gallon buckets with Gamma Seal lids. Our research indicated that plastic buckets with a food grade rating topped by a Gamma Seal lid should keep our food fresh and free from insects. Since we had not tried this technique before, we were a little skeptical at first. If you want to try something like this do your research, and make sure the buckets you use are food grade plastic.

Now, six and a half years later, I have absolutely no qualms about using this technique. At first we added a few oxygen packets to the buckets. But then we realized that after opening the buckets a few times to fill up our canisters, the oxygen packets would no longer be viable, so we quit using them. We still add a few bay leaves to each bucket of flour, rice or corn meal, but that is the only addition we make.

It is fairly easy to add a Gamma Seal to a bucket. First we wash everything well in soap and water, the bucket, the rim and the lid. It takes a while for all of the sections of the lid to dry completely before use. Then we attach the rim of the seal to the bucket using a towel and a hammer. If you are much younger and invincible, you may just be able to push down hard enough to snap these rings in place. We use a hammer. That’s it, your buckets are ready to fill. We buy our buckets from Atwood’s because they have the best price around. Every so often they put them on sale which is the best time to buy. We have friends that reuse buckets from bakeries or other places they have found them.

There is one little flaw we ran across, and it’s not actually a flaw with the Gamma Seal lids. I’ll do my best to explain this. When you stack one bucket on top of another with the Gamma Seal lids on top, it has a nice fit and it seats well. We stack them three or four high, and put the heavier items, like sugar, on the bottom. What we found is, if you tilt the three buckets on top of the bottom one forward, instead of the weight being equally distributed on the bottom bucket, then all of the weight of the top three buckets is focused in one small location causing the screw on lid to crack. This is not a fault of the Gamma Seal, it is operator error. Too much weight in one focal point, instead of being equally distributed. It took us a while to figure out what was happening. To alleviate this, just don’t tilt the buckets forward, lift them straight up. 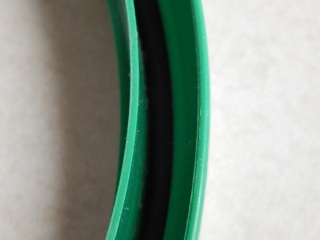 The best prices I have found for Gamma Seal lids are from the Ohio-Pierce Companies at freckleface.com. They have a number of ways you can buy. I usually get them by the dozen. One thing I have learned is to check and see if each rim has a gasket included. If not, Freckle Face will be happy to send a replacement. Just make sure you check them when they come in and not six months later, like I did one time, which was too late to get a free replacement. 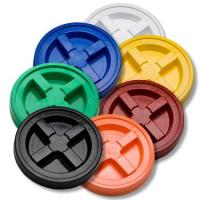 Also, food for thought. Once you put the rim on a bucket, we have not been able to figure out a way to get it off without destroying it. We use these lids on almost all of our buckets. And to identify the contents, we use duct tape. If you change the contents, change the duct tape. We put the contents and the date on the outside of the bucket and then stack them with the label out. These are little things we have learned from experience. Put the heavier stuff on the bottom, don’t tilt the upper buckets forward, and put the labels where you can see them. This system works exceptionally well. We have yet to have any problem with any of our food stored this way. Some of it is in the house and some of it is out in the garage. Storing foods in an out building where temperatures fluctuate in the summer and winter does impact the longevity of the food. But sometimes you have to make due with the space you have. I figure it would be better to have the food and not need that much, than to not have it and need it.

29 thoughts on “Have You Ever Used Gamma Seal Lids?”