This is the time of year that I start keeping a close eye on our does. One Stripe and Copper are due February 10th, which won’t come too soon for me. I have been lamenting our lack of fresh goat milk for a while now, and I miss the daily milking routine. Some folks would find milking twice a day to be a grinding drudgery. There are days the weather doesn’t increase my enjoyment of milking my goats, but they are few and far between for me. My friends have already had to start listening to me tell them again and again how much I love baby goats and having fresh milk. I’m grateful they are patient with me and tolerate my repetitive excitement. So, here is an update on how my wonderful does are doing. 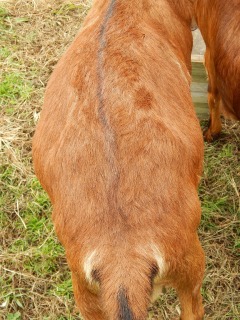 One Stripe tends to get almost as wide as she is long toward the end of her gestation. She is on her way to the waddling stage and her udder is just starting to fill out. Since she lost her babies last year, I am more concerned about her than I have been other years. One Stripe is our old lady goat, she will be seven in May. Except for her mishap last year, she has been a great mom, very attentive, with strong, healthy babies and lots of milk. I have been watching her closely to see if she is showing any signs of aborting early again. So far, so good. 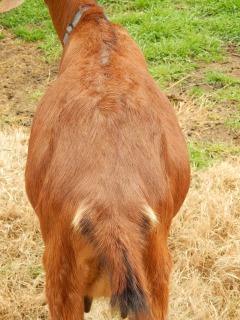 Copper will be having her second set of kids this year and is filling out quite nicely. She is already bigger than she was last year, or it seems like it to me. Her udder is also starting to slowly fill. She had twins last year and was also a very attentive, with lots of milk just like her mother, One Stripe.

The body condition, udder and alert, attentive behavior are some of the things I watch for in my pregnant does. I keep an eye on their skin condition, too. One Stripe tends to get a little dandruffy, dry skin toward the end of her pregnancies. Copper doesn’t. I check the base of their tails to see if their hips have begun to spread, which so far, they haven’t.

Next week I will start bringing One Stripe and Copper in the barn in the morning and giving them a little extra grain. All of the does get some grain in the evening, but not much. Kids put on most of their size and weight the last month of gestation, so this extra feed in the cold of winter will help keep these does in good, healthy condition. I also make sure to keep minerals out all the time during gestation. The goats are still out grazing everyday and getting plenty of exercise. There are certain grasses and weeds that grow almost all winter here so they have some fresh things to eat each day. If it is cold and wet with rain or snow, we keep hay in the manger. Otherwise, the fresh graze of the pasture is much more nutritional and meets their needs for roughage.

We have three young does that will be first fresheners, or having their first kids this spring. These does are not due until the first week in April. They are all looking very good, starting to thicken in the middle, while they continue to grow to full size goats. These three does were bred when they were 8 months old.

There are varying opinions on when to breed young does. Some folks will not breed them until they are a year old. Some go by weight, the common recommendation is 80 to 90 pounds or 8 to 9 months old. Some folks insist that it will stunt the growth of the doe if they are bred before they are a year or more old. Others insist the does will not produce as much milk if they are allowed to wait until they are older to have their first kids. So, if you are interested in, or are getting started with goats, you will have to decide how you are going to handle your breeding and birthing conditions. There are also other goat owners that run the herd together year round, allowing them to breed and birth as they will. We control our breeding times by keeping the buck separated from the does. As I discussed in the last goat article, we tried to breed One Stripe in July, but the buck was not mature enough. So, our breeding schedules don’t always work out the way we prefer. We have also had does breed at times we didn’t think it would ever happen. Like one month after birthing when they were raising triplets. That was one of those learning experiences we wished hadn’t happened, strictly for the health of the doe. I think that is way too hard on their bodies. Some folks let their goats breed anytime, and want them to produce as many kids as possible. To me, that’s just breeding them to death, literally. It uses up the strength of their bodies long before it otherwise would.

Since I have already warned you about my repetitious nature when it comes to baby goats, you won’t be surprised when I say, “Did I tell you how much I love baby goats?” I will continue to keep you up to date about the progress my does are making. If you have any questions I can help you with, please ask in the comments. On some past posts, I had some great questions that helped me to learn more, as well as gave me more ideas of things to share here. So, let me know if you have questions. After all, since I love baby goats and the whole birthing process, I’d love to get a conversation going.

6 thoughts on “Watching Our Pregnant Does Grow”