A while back we had a comment about the effects of chemicals on the generations that have grown up in the past 20 to 30 years, and especially the current generation. The term that was used to describe this group was androgynous. Well, I hadn’t run into that word before, so I looked it up.

Androgynous : adjective
1. Having both female and male characteristics
2. Being neither distinguishably masculine nor feminine, as in dress, appearance, or behavior

Now I want to give you some data from several websites outlining some of the impacts of only a few chemicals that today’s children are growing up ingesting and being exposed to since the time of conception.

From Rodale News: Canned Food Carries a Hidden Health Risk
“But thanks to an epoxy liner commonly used to prevent canned products from reacting to the metal, everything from canned fruit to canned salmon to canned peas is exposed to plastic chemicals for as long as it remains on the shelf.” It goes on to say, “The liner is manufactured with a chemical called bisphenol A (BPA), which has been linked to a variety of health problems, including hormone disruption, prostate cancer, diabetes, and obesity, as well as aggressive behavior in children. A new analysis by Consumer Reports confirms that BPA that lines cans ends up in the food that we eat.“

From Forbes: 11 Toxic Chemicals Affecting Brain Development in Children
This article has details explaining the effects of 11 common chemicals and is well worth reading. It is a long article and toward the bottom of the first page it deals with the effects of BPA. “BPA is an endocrine (hormone) disruptor, and, strongly suspected to affect neurodevelopment in children, it has been banned in baby bottles and sippy cups.”

From Rodale News: BPA Free Products May Still Contain BPA
This article deals with baby bottles and the coating on the inside of the lid of baby food jars, which still allow some BPA to contaminate the food. Yes, this says the baby food jar does not contain BPA, but the lid does. So, you need to practice critical reading skills. Just because the container doesn’t have it, doesn’t mean the lid doesn’t.

From WebMD: The Facts About Bisphenol A
“More than 90% of us have BPA in our bodies right now. We get most of it by eating foods that have been in containers made with BPA. It’s also possible to pick up BPA through air, dust, and water.”

From the Huffington Post: BPA Could Affect Brain Development by Impacting Gene Development, Study Finds
“BPA’s effects on the human body are of concern because some research suggests it is an endocrine disruptor — meaning it affects the way hormones work in the body, leading to possible reproductive and developmental effects, not to mention a possible link with a number of diseases and conditions, such as diabetes and obesity. Researchers noted that BPA is known to mimic estrogen in the body; the chemical is currently banned from baby bottles and cups in the U.S.”

Genetically modified (GM) foods have been shown for years to affect both man and beast. They have been banned in many countries in Europe and Asia, and yet the major corporations, the FDA and our loving government continue to force them upon our population without informing us of their presence in our food source. You can probably tell this is a topic I find utterly amazing, dispicable and inexcusable.

From Mercola.com: GM Foods More Dangerous for Children than Adults 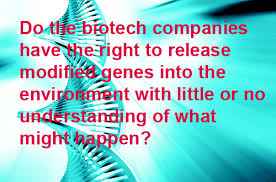 As I read down this article it makes me sad and mad at the same time. It discusses the ingestion of GM food from the time of inception throughout childhood. It talks of the contaminants of GM food found in breast milk, regular cows milk, cornstarch used in baby powders being absorbed through the skin, and “Among the potential side effects are changes in soy’s natural estrogen mimickers, which may influence sexual development.“

How can we possibly know the effects of the huge quantity of chemicals we submit our bodies and the bodies of our children to every single day of our lives? This phenomena has been going on long enough that we are now seeing some of the results.

About 30 years ago Frank discovered that the lining on the inside of a green bean can, and most canned foods, was made from an estrogen type product.  He wondered then how it was affecting the population, especially the male population. As he taught high school for many years, he was able to chronicle many changes over time. Here is his take on it.

Many boys are not interested at all in getting their drivers license now days. A drivers license used to mean freedom. A freedom to pursue the interests that most sixteen year old boys have, and the interest is girls. Most of these same boys who are not interested in getting a drivers license, also have no interest in girls. Sure they have female friends, but the drive to pursue a female relationship just isn’t there. Now, I’m not referring to all boys by any means. There are still those boys, and lots of them the day they get their drivers license, can’t wait to take their sweetie for a drive. I’m happy for those boys, because these are the boys that we need. But, unfortunately, I’ve noticed a lot more of the others. The ones that would rather sit at home and play Xbox.

This is just an observation, of course, but in the back of my mind, I can’t help but believe that this is just one more attack on our society. This is kind of a broad statement coming up here. But, George H. W. Bush, the first one, advocated for a New World Order, which is one centralized government. We know that our religions are under attack, schools are under attack, finances, the military. Is this just one more attempt to neutralize a portion of our society? Just food for thought. Frank out.

The comment we received about the androgynous nature of the coming generation has stuck with me and made me observe our youth more closely. There have been times Frank and I have been driving down a street, or sitting in a restaurant, and wondered if a person were a male or 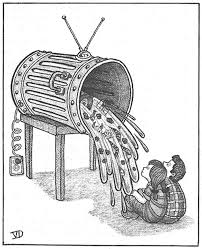 female. It didn’t used to be that way. There used to be a definite masculine quality to men, and an obvious feminine quality to women. What happened? Between the chemicals, the forced indoctrination into liberal tolerance, the mind numbing drivel spewing from the television 24 hours a day, the addictive trance-like dependence upon cell phones and video games, the break down and ridicule of the intact family, and the outright bigoted hatred of all things Christian, how can the coming generation find their way? How can they even begin to understand what has been heaped upon them in an effort to sedate them and make them malleable and compliant? How will they ever be able to stand up for their freedoms? 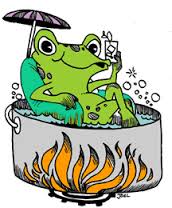 If the powers that be have had a long term goal of creating a society that is easy to control and will do the master’s bidding, we are almost there. As we watch a large percentage of society hippity hopping through their days, happy the big game is tonight, that they will get to watch on their big screen TVs, while jumping up and down to imitate the cheerleaders, eating cheese doodles and hollering, “Yea! Yea! Man, did you see….??!!” Then all is well. No need to prepare, no need to pay attention, no need to wonder where the next meal might be coming from. All is well. Oblivious to the fact that they are like the frog in the pot, and soon the water will be boiling.

The androgynous generation. They are our future. I wonder where that will lead us?

19 thoughts on “The Androgynous Generation”