There are times that life on a farm or homestead can be a joy and a challenge. After One Stripe’s successful birth of healthy, vigorous babies, we had a couple of days before Copper was due. So we tried to get a few things done. 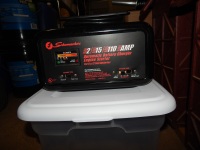 We wrote about the beginning stages of getting the solar panels ready for installation a week or so ago. Frank has started charging and conditioning the batteries that will be used with these panels. We bought the batteries a few years ago, and it’s time to charge and desulfate them in preparation for installation. He got that in the works yesterday in between trips to the barn to check on One Stripe and her babies, and to see if Copper happened to be in labor. 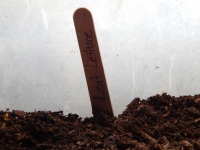 While Frank was working on the batteries, I managed to make up some coleslaw and deviled eggs. I figured the next

few days would be busy and  wanted something quick and good to eat on hand. Then I was able to get a few seeds in the dirt. I have some old seeds that may not be viable any more so I wanted to try and use them up. I put a thick planting of dill, lettuce, mustard, onions and mixed baby greens back in the

herb bed. Then I planted three dishpans of seeds to put in a south window in the house. It was a beautiful, sunny, 65* day, and it was great fun to play in the dirt.

We decided to let One Stripe and her babies out of the birthing pen last night after two days of confinement. The babies are very vigorous, jumping around and exploring the barn. If they had not been this active, we would have kept them penned up for another day or two until we……….[Interruption…….] We just had a little rain shower pop up and I went to make sure these babies were in the barn instead of out in the corral or pasture. They were tucked into their birthing pen with One Stripe. This is one pen that we are able to remove the gate easily since we have it attached with double end brass clips. When we let them out, we actually just removed the gate so the kids can ‘go home’ when they want a warm place for a nap that is out of the way of the regular activity in the barn. And that is where I found them just now.

While Copper was eating on the milk stand last night around 5:30, I checked her udder and it was tight and full, which means her milk had come in. I knew then she could give birth anytime, so we planned to check on her again around 9:00. We also put her in a birthing pen, just in case. Her tail was becoming very pronounced and I figured she would have her kids in the night, so we made plans to come back and check on her at midnight. No babies.

When we got back to the house after the 9:00 barn check,  I went out to feed the cats and found Little Bit barely alive. She was having difficulty breathing and was very limp. Little Bit got her name from being the very littlest kitten of the four we got a few months back. She has always struggled to be healthy, fighting a type of kitty cold from the time we brought her home. We carried her to and from the barn a lot, because she couldn’t keep up with the others. We had taken her to the vet a few weeks back for a long acting antibiotic and steroid shot which helped a little, for a short while. Instead of letting her suffer and die in the night, with much sadness and tears, we put her out of her misery. Thus is life on the farm sometimes. This morning, I miss Little Bit.

After the short trip back to the barn at midnight, Copper hadn’t started labor. That made for a short trip, so it was back to bed until about 5:45 am. As I sleepily got dressed to head back to the barn, my thoughts were on another short trip, and back to bed for just a little more sleep. It wasn’t to be. My arrival at the barn this time found Copper having contractions, not often, but contractions. With the sun just beginning to color the horizon, I settled into my barn chair to await the sun and the birth of new kids. I called Frank on the radio to give him the news. Remember we use our handheld radios all the time, and they come in very, very handy. Now it was his turn to get dressed and gather water, coffee, the camera and some snacks for me. He is truly a great husband. 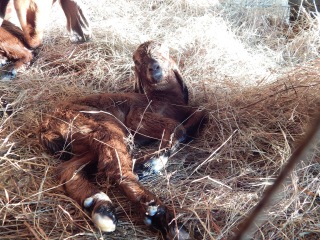 After a little over an hour and Copper spending most of her time standing up, we decided to go down to the house for a quick breakfast and to warm up. Upon my return, I found a beautiful baby girl, mostly cleaned up and talking to her momma. From the looks of Copper, I knew she wasn’t finished yet. Since nothing seemed imminent, I brought One Stripe in on the stand to be milked. No sooner had I gotten started, when Copper laid down pushed real hard a few times, and had another baby half way out. I guess she thought that was far enough because she stood up, and out he came and plopped in the hay. Copper is a great mom and started cleaning him up right away.

Now you can meet Buttons, another beautiful baby girl. Her coloring and markings are very similar to Patch, except the white on her side is kind of splotchy and she has white on two of her feet like her grandmother, One Stripe. 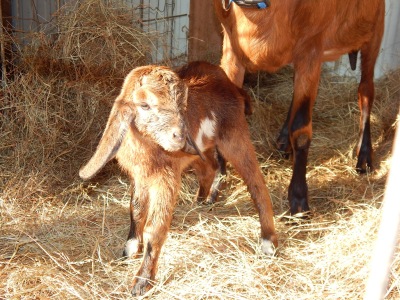 Her brother, in keeping with the way we name boys, is named Lunch. He has more white than Breakfast, and is really a good looking boy. 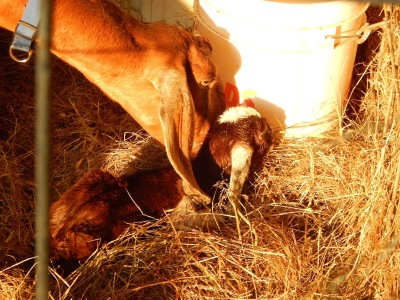 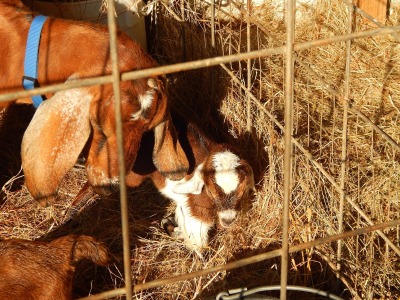 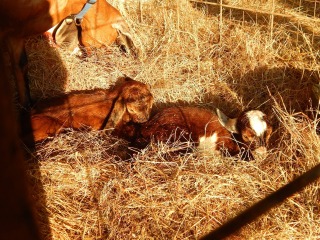 Both of the babies are vigorous with a healthy set of lungs and a very good sucking instinct. I made sure they had another meal when I went up during the rain to check on One Stripe’s kids. I also collected the afterbirth from Copper’s pen since she was finished passing it. The goats will usually eat some of it, but we remove it once it’s passed to prevent the smell from attracting any predators. On this trip to the barn I found Pearl laying right beside the gate to Copper’s pen, right where she is supposed to be, protecting the new mother and kids.

Right before I left the barn this morning, I realized that one of the young wethers was limping very badly and wouldn’t put one of his feet on the ground. But my back needed rest, so inspecting his hoof will have to wait for the next trip up the hill to the barn. Raising and breeding animals is not always a successful venture. More often it is, but not always. Sometimes they live, and sometimes they die. Such is life on the farm. 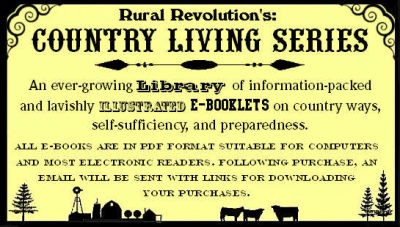 A different topic. If you are looking for more information about homesteading, gardening, preserving food, moving to the country and more, we would highly recommend that you check out the new ebook store, Country Living Series by Patrice Lewis, from Rural Revolution. Frank and I have read two of them, The Death of Knowledge and Bovine Basics for Beginners, and found them well written and informative. The Lewis family has been homesteading for several years. Patrice and her husband, Don, share many of their experiences in these writings. There is nothing like experience to teach you something, but reading first hand information from someone that is describing their life and learning is the next best thing.

We continue to learn each and everyday that we are blessed to live, and for that we are truly thankful. Each day that we can spend living life on the farm is one more day in paradise. Challenges and hardships cannot dim the blessings that this life brings with each new day. Now it’s time for another trip….to the barn.