Life on the homestead continues unabated, sometimes it’s like running full steam and sometimes it’s more like a walk in the park. Lately we have been surrounded with steam. Here’s a look at what’s been happening. 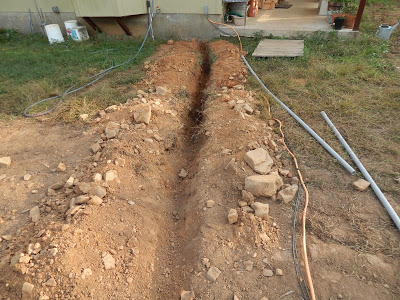 Isn’t this a beautiful ditch? You’re probably thinking I’ve been in the ‘steam’ too long, right? Well, the ditch itself may not beautiful, but what it represents is very exciting. Emmet has returned to barter more labor, for radios this time, a few evenings after he gets off of 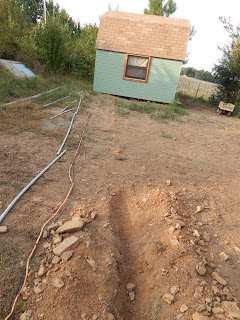 work. Weekends are devoted to his family, which is as it should be. Emmet found many, many more rocks in this ditch than any of us were planning on, so it will take longer to accomplish this task that we first thought. This ditch will hold the conduit, that will hold two strands of wire, which will connect this building to the house. Why is that exciting? Because these wires will soon connect our radio shack and house, to a battery bank and solar panels. We’re not sure just how soon, but sometime in the not so distant future. 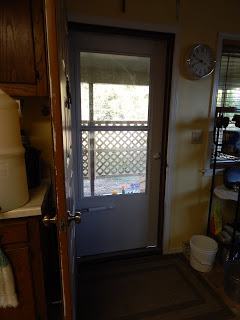 Yesterday while Frank and Henry installed storm doors on the house, which are great, I butchered a goat. Frank dispatched him for me and brought him down to the garage in the bucket of the tractor. I have to tell you, though, I did not take one picture yesterday. It was a long, long busy day. The goat provided us with about 45 pounds of meat, 10 pounds of dog food and some soup stock.

Dressing out an animal really doesn’t take that long. Processing the meat does. We only kept two partial hind legs as roast. The rest of the meat was deboned, ground and frozen. I wrapped the ground meat in one to one and half pound packages and got them in the freezer at about 7:45 pm, just a few minutes before our second Survival Radio Relay Net. After the digging, Emmet stayed for a cup of coffee, and to see how Frank ran the net. 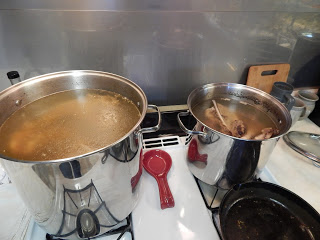 As I removed the meat from the bones, I kept looking at all the meat left on the bones. In the past, I have always just thrown these bones away. The longer I looked at them, the more I knew I needed to boil them and make some soup stock. So I did. I cooked them for several hours as I worked on processing the meat. 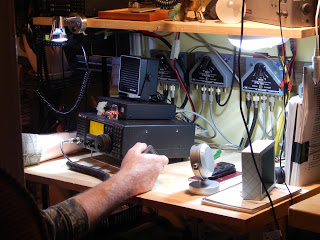 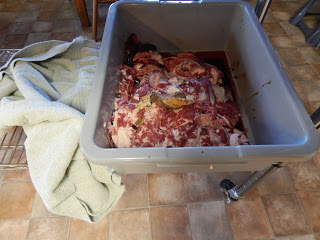 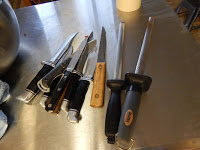 We finally had supper at 10:00 pm in the midst of a very messy kitchen. I actually left this tub of dog scraps and many, many dirty dishes overnight. I had totally run out of steam for the day, and 6:00am would come very soon for the start of another day. I also forgot to bake the bread I had made this morning. I just shook my head and hoped it would taste good when I baked in in the morning. It did. Frank thought it was some of the best sourdough bread we have had so far. It sat for 24 hours after I made the dough and before it was baked. Interesting. 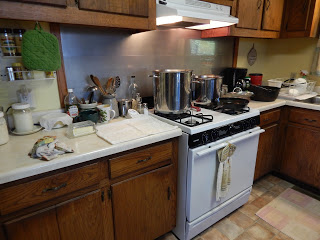 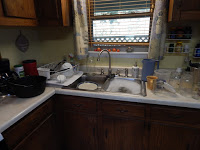 This morning it took me a couple of hours to clean up the kitchen. I returned the pots of stock to boiling, made rolls from the bread dough and left them to rise while I fed and milked the animals. Frank and Henry got to work early on the framing for the outdoor kitchen floor. Here it is today, but tomorrow these forms will hold a new concrete floor for the kitchen. We will keep you updated. 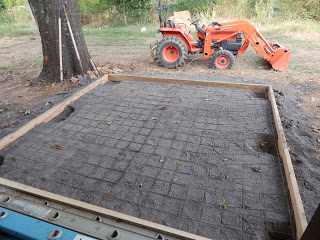 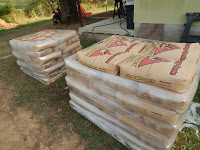 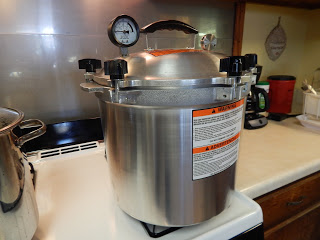 Frank worked over the lid and top edge of the All American Canner that wouldn’t seal well enough to reach adequate pressure and we tried it again. It still doesn’t work so we will be sending it in to see if the company can fix it at our expense. 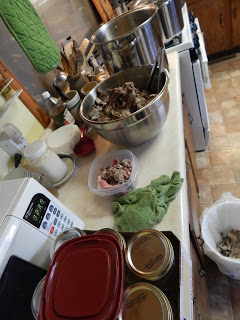 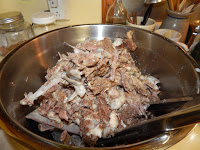 It’s now 6:00 pm and there are two canners of soup stock on the stove with more left in the pot to go. So far we have 21 quarts of stock and we will put what’s left in pints. It looks like the last one won’t be finished until about 10:00 pm. Update. It’s now 8:00 pm. The last seven quarts will be ready to take out of the canner around 9:00 pm. I just put the pressure weight on the canner with 13 pints, and it has to come to 10 pounds pressure and stay there for 90 minutes. We won’t be finished by 10:00 pm, but we’re happy with the amount of soup stock we’ll have to put on the shelf. 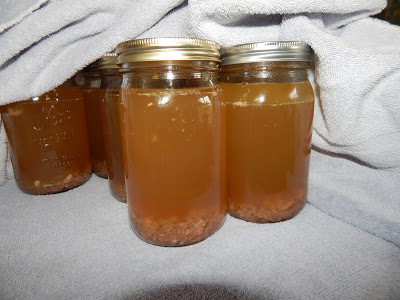 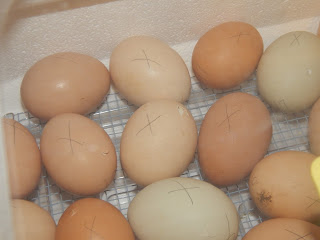 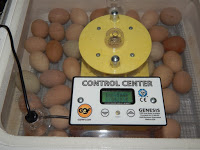 We have one more incubator full of eggs hatching as we speak. At first I took this picture to share with you, but before I could finish writing and publishing this article, they started hatching. That means I need to butcher and can the last 12 or 13 chickens out there from our last hatch. They are a too old for fryers, and we wanted some chicken meat on the shelf anyway. Looks like that’s a job for Friday because tomorrow is mozzarella. The refrigerator is over run with milk again. 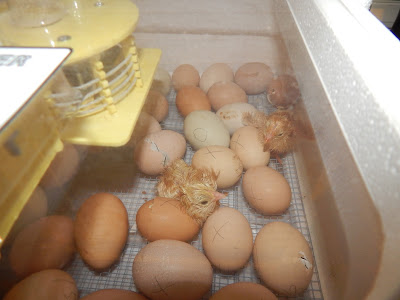 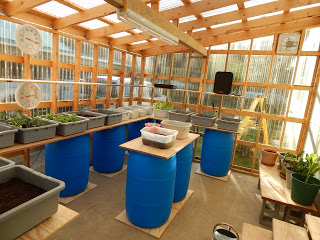 There have been several questions and comments about the greenhouse since we put this picture up on the header. It still doesn’t seem quite real that we finally have a greenhouse, and we have already decided it’s not big enough. 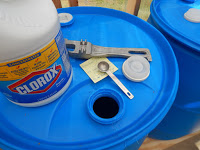 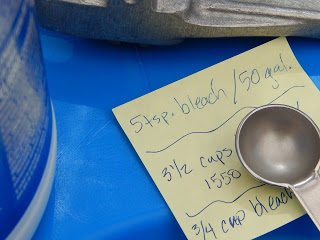 We were asked if these barrels hold a back up water supply. The answer is yes. We don’t plan to use the water very often unless it is needed. We hope to have other sources of water connected and ready to use before long. But since we do want this water to remain potable, we treated it with bleach as we filled the barrels. We did a search on recommended amounts of bleach and came up with 5 teaspoons per 50 gallons of water. Five teaspoons is approximately one ounce, which is easier to measure when you’re trying to pour it out of a new gallon jug. 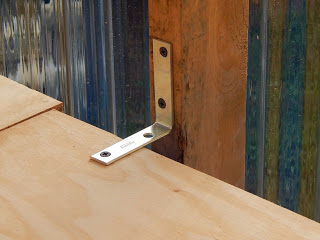 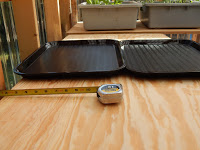 After we filled the barrels and got everything placed where we wanted it, Frank added some brackets to the back of the ‘table tops’ to hold them in place. We brought them an inch and a half away from the studs to allow room to place two trays side by side. This will allow us to use the space more efficiently. The bus tubs, there was a question about them, are the same ones that restaurants use to clean or ‘bus’ tables. Sam’s Club has them with the restaurant supplies. They have been great, but the sun just kills them and makes them very brittle. We will build our own before long and fit them to the trays. I hope they hold up better in the sunlight than the bus tubs did, we’ll have to wait and see about that. 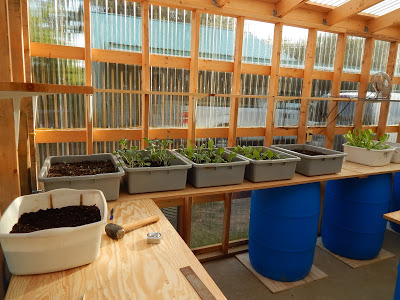 The purpose of the water is for thermal mass. We are hoping it will help even out the temperature in the greenhouse. On sunny days when the outside temperature is in the 80’s, it quickly rises to 100*+ inside. The first day we moved the seedlings off of the porch and into the greenhouse was before we added water to the barrels. I didn’t water them enough, and in the afternoon, a few of them cooked, even with the fan Frank had installed. Since then, I have tried to make sure the tubs are watered very regularly, and we do think the water in the barrels makes a difference. Even if the thermometer is registering 100*, the plants don’t seem to suffer for it. I plan to dig up some strawberries and comfrey and bring them in for the winter and see how they do. That will be interesting. I also have kept the mandarin orange and lemon tree idea in the back of my head that someone mentioned a while back. 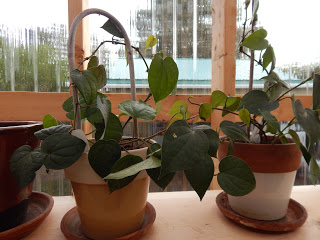 I brought these two black peppercorn vines, piper nigrum, in to the greenhouse. They have been growing on the porch all summer. I also brought in a preying mantis with them. I hope it sticks around and helps with the bugs that may show up. 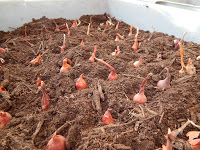 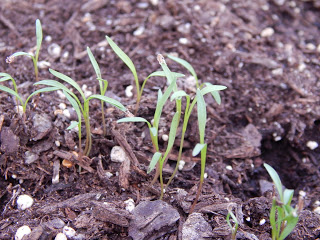 I planted more seeds in more tubs, but there’s not much to show for now. There are carrots, turnips, muskmelon, squash, lettuce and spinach coming up. I also planted some onion sets that I bought in the spring and never planted. Maybe we will have a few onions to eat this winter. 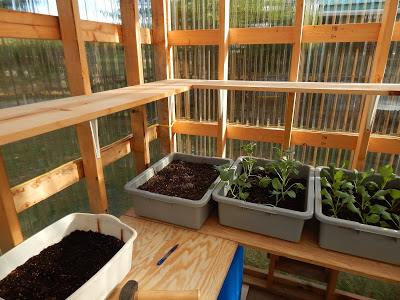 Tomorrow is another busy day, cheese and concrete. If you’re interested in radio communications, stay tuned. We will have new antenna towers going up soon. This will increase our ability to reach the folks in our area which is critical. The solar panel project will also help insure our ability to communicate. The radio shack will be the first thing to go ‘on line’ once we have the 12 volt system connected and functional. We really look forward to that day. Meanwhile the water storage tanks at the barn are still on the docket for completion. We need a few more supplies and some more ditches dug before we can proceed. 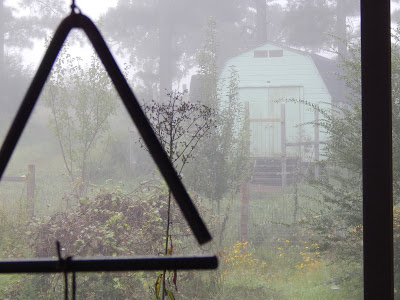 There are days that it would be easy to quit, days that we’re tired and worn out. There are some days that we just don’t want to get out of bed and tackle the day. But we do. There is much to complete and time is short. Our pace seems to quicken a bit more each day. When we get out of bed, we pour a cup of coffee and check out the news of the day including the blog. There is usually another comment telling us what you’re doing to prepare, full of encouragement, and we know we’re heading in the right direction. Make sure you are too.