We raised pigs for a while, the American Guinea Hog. It is a standard breed, just smaller in size by nature.

Well, the day of my uncle’s funeral, six months after my double bypass, we were feeding the pigs that night, which we had done every night for a year or two. The male pig decided he wanted to get a little aggressive. His weight was around 250 pounds, fully grown. I felt a nudge on the back of my leg, then I felt a nudge again, a hard nudge, which is not really uncommon, our pigs just did that. But on the third nudge, I realized he was biting me about knee high. I hollered at him and he started to circle me.

Being the prepared person I am, I pulled out my pistol and fired a shot into the ground in front of him. This did not deter him, he continued to circle. It was still daylight at this time and I knew what was coming, so I shot him right behind the head, which ended the circling.

Here is food for thought. When I drew my pistol, I did not have to think, is my gun loaded? Is my safety on? You see, my gun is an extension of my hand. I didn’t even have to think about where it was pointed, where it was aimed, it was second nature. I know my gun. I know it well. I have shot this same brand of pistol for decades. You need to practice and you need to train. You don’t want to be fumbling for a light switch in the dark, you want to know where your flashlight is. You want to know that your radio is charged and what frequency it is on. Your life my depend upon these little, bitty, simple things. An animal circling is looking for a weakness. Don’t give your enemy a weakness to exploit.

So, you say what’s the problem? A 250 pound pig, the way pigs are built with their neck strength, if he had gotten me to the ground, he could have killed me. That’s the problem. So we waited a few months to see if any of the girls were pregnant, which they weren’t. We hauled off all of the pigs to the butcher, therefore, no more pigs. No more surrender.

If I had not been carrying my gun, well, we can speculate all we want. We are a gun carrying family. When Fern leaves the house, she is carrying a gun, and I don’t mean leaves the house to go to town, I mean when she leaves the house – to work in the garden, to take care of the chickens, to go to the barn, or any other household type chore that takes her outside. Fern is very capable and competent with her pistol. She is one of those people that knows which end of the gun the bullet comes out of. She knows that a gun will not fire all by itself, and she knows that her little 40 caliber Glock will stop a 250 pound beast from doing her damage, or worse, killing her. Fern lives in reality. A gun is a tool, just like a shovel, or a flashlight, it is a tool. 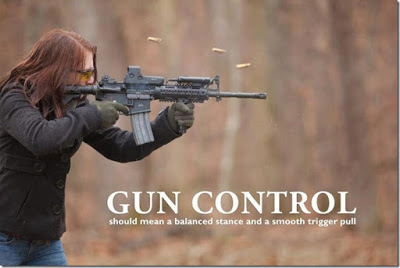 My pig story, it could have had a horrible outcome, and it did for the pig. You see, there are people out there that say I can’t carry a gun, and there are other folks that say I could have handled the pig situation different. Well, let me be very simple about this. I don’t care what those people think, and I know they don’t care what I think. But if anything messes with my way of life, I’m going to stop it, by whatever means necessary. On occasion, we’ll have a dog come through. What if that dog is a drunk, meth druggy piece of crap in the form of a human? Some people call it the Castle Doctrine, it used to be called Make My Day. But God, through the Constitution gave me the right to protect myself, be it man or beast. Rights come from God, and if you don’t believe in God, then your rights come from the Constitution, which by the way, those rights came from God.

I refuse to let some beast rape or kill my wife because some bleeding heart liberal refuses to accept his responsibility to defend his wife and family. I call these people cowards, among other things that I shan’t say here. A tool. It’s just a tool. Can a hammer be deadly? Absolutely. Can a diving board be deadly? Can a kitchen knife? How about that 4000 pound piece of 70 MPH projectile sitting out in your driveway?

I refuse. Listen to me very carefully. I refuse to surrender my right to protect myself and my family. There are more commandments than just the Big Ten. I’m leaning heavy on God here, but it is my right as a man, and a warrior, and it’s my God given responsibility to be a man and protect and defend those that I am responsible for.

I can hear the snowflakes screeching now. This beast is a barbarian! So be it. We are losing our society. Some people would say we have already lost. I’m one of them. If we do not get up off of our fat, lazy, stupid butts and take this bull by the horns, then in a generation or two, we will not even recognize our neighborhoods, our society, or our culture. Don’t think it can’t happen, because it is happening, while we sit and watch TV, laugh as we watch the perversion, and stuff our fat faces with Cheetos. Read your history. It has happened many times before, people have lost their cultures by idly sitting by. Once you lose, you lose.

It’s raining at my house today. A good day to sharpen your kitchen knives. A good day to sharpen your skills. Just look around Ladies and Gentlemen, 90% of the people will never fight, 1-2% of the people will fight. King George had the overwhelming majority of people on his side. If you don’t know who King George is, then you should. He had the overwhelming support of the people in the colonies and 1-3% of the people overthrew his local government and his trained military. These were tough people in a hostile environment. Do not believe a word our government says. You know we need leadership that I do not see stepping up. Our last president, Mr. Obama, said that we are not a Christian nation, he was wrong and is wrong. We ARE Christian and we are in need of those 1-3% of the people to do what the majority will not do.

Next. Quit trying to change the minds of people that you’re not going to change. You’re wasting energy. I have tried for YEARS and the government and the media has convinced the people that everything is just fine. So quit wasting time trying to get other folks to see it your way. Be very careful who you do trust because through the kindness of their own heart they may tell someone what you’re doing and that person may not be a kind, gentle person. I have heard people in church stand up and ask for prayers for when they go on vacation for two weeks. Great. They just told a whole church full of people they’ll be gone for two weeks. If one person, in light conversation, mentions that to the wrong person, their house could be empty when they return.

It’s time to quit talking and thinking about telling people what you’re going to do. A veteran street fighter knows that when someone tells them what they’re getting ready to do, it’s not going to happen. A veteran street fighter never tells someone what they’re going to do, they just do it. Trust me. Remember the last presidential campaign when Mr. Trump said we are going to quit telling the enemy our plans? Word to the wise.

It was me or that pig. I chose me. I am the person responsible for my house. I choose life over death. Our mindset is strong. Plan to feed those you can, but if you can’t, don’t worry about it. Do not put your family in jeopardy for the fool next door that didn’t prepare. It’s your choice.

46 thoughts on “No More Surrender”