A few days back I was reading comments on WRSA and I ran across this little clip. If you have a minute, and it won’t take much longer than that, just read it and get the gist of what it is saying. Fern and I have written numerous articles about storm clouds, don’t get on the bus, ample food storage, water, chickens, eggs, goats, cheese, gardening, what type of vegetables, canning, and the list just never ceases. It’s not just us, there are hundreds of folks out there writing and providing information to help you see what is obviously coming.

It doesn’t make any difference if you’re right, left, red, blue or pink. This thing is going to affect everybody. There won’t be bastions where there is relative safety. If by chance there is, you and I won’t be there.

This guy’s comment, it was profanity laced, but read what he is saying. Here at Frank and Fern we don’t support this style of language in our written blog, but that doesn’t mean that this man is wrong. I’ll say it again. Read what he says, get the message. It is time to get out.

Now, if you would, take a minute and read this fellow’s comment.

Anything Left to Talk About
**Language edited by Frank and Fern 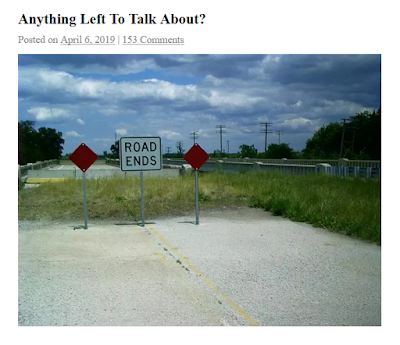 I have a lot of sympathy for people that are genuinely trapped in suburbia but I suspect that 9 out of 10 people that say “I simply can’t move to the sticks” are full of ****.

What, you need ******* dialysis treatment twice a week?
“Muh wife and daughter”.

Sack the **** up. Get out of town and if you don’t have the the authority to force everyone to follow then you weren’t the man of the house anyway. If you can’t force a move then what do you think is going to happen when things get ugly and your “household democracy” kicks into action.

Gangs are going to go door to door and burn out anyone that resists. They will take their casualties and have a thousand recruits waiting to fill the gaps because life will be so cheap as to be worthless. The leaders will send their soldiers and if you fight back then they’ll toss bodies at you until they win just to get your guns, much less whatever you’re using them to protect.

At that late point all your excuses about “muh wife and daughter’s social lives” are going to seem pretty ******* lame in retrospect.

I got out 10 years ago and it was a ******* hard sell and a harder move. Once we got here none of us second guessed whether we were better off back in the hives. All the hardship to get here has paid off a thousand times over, and we’re not even in the deep end of the **** yet.

Wasn’t that long, was it? Actually a pretty easy read. So, are you one of those type that thinks you will see what is happening before it gets here? It won’t do any good to talk to you, because you should have already done it.

I know, I know, I just can’t do it right now. Today I’ll use excuse #431. I hope I don’t upset anybody here, but if I do, get over it and find a way to take your family to safety. If you just show up at grandma’s house, she may turn you away. How is she going to feed you? Think about these things.

Okay, I’ll let you go so you can go back and watch TV, eat Cheetos and pound on your chest like a gorilla. We’re not all gonna make it through this thing, even the most prepared won’t all make it through it. Get your head screwed on right and quit riding the fence.

Sorry about the bad news. The fat lady has sung.