Weaning baby goats is not difficult if you have good fencing. You just separate them from their mothers and wear ear plugs for a few days. Sometimes babies are sold, making the weaning easy. So far, we haven’t sold any babies this year, and actually, we didn’t have any for sale. Two different families have stopped by recently looking for a new billy goat, which is an oddity. When you raise goats you need to plan on keeping your bucks as wethers for meat, or taking them to the sale barn. Bucks, just like bulls, are a dime a dozen and each herd only needs one. So, if you are planning to start raising livestock, have a plan for the excess male animals you will be raising, whether it is chickens or goats.

We put some extra 2 x 4 stock panel sections along the bottom part of the corral specifically with weaning in mind. Before we had this up, we found that some very determined babies could still squeeze through the pole gate and find their way back to mom and a meal. Now the babies can only stand there and cry. Loudly. Well, only for a day or two until they lose their voices altogether. But it will come back, and by then they aren’t crying near as much.

Copper and Ivory aren’t real happy that their babies can’t come to them when they call. So they fuss at me. That’s okay, because I think that is a sign of a good mother. Their babies are now ten weeks old and more than ready to wean. Some people wean at six weeks, but eight weeks is probably the norm. We choose ten weeks because it just makes for a stronger, healthier baby. It won’t take long, before the does are fine with only being milked and not having big babies nursing. To accomplish the task of weaning we had to do a little bit of goat musical chairs, or ring around the pastures. First I put the does and babies in their pasture and closed the gate. 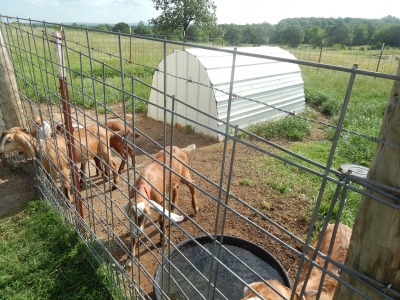 Then I got all of the wethers and boys to go in the pig pen. (We used this pen to feed out a couple of pigs once and the name stuck.) After they were all in, I sorted them until only the two young bucks that were born here were left. We had put them in with the new buck, Bill, while he was still in the trailer after his arrival. The big boys and Bill, I moved into a different pasture next to the does.

Now I let the does and babies out of their pasture. Next, I put the does in the barn with grain to eat. I was hoping the babies would follow me with a feed bucket into their respective pasture. That didn’t work too well. Copper’s babies cooperated, but Ivory’s didn’t. I ended up luring Ivory into the big baby pen in the barn, then catching her girls and carrying them to the pig pen. They’re getting heavy!

Whew! That was done. We decided to leave the babies locked in the pen for the night. The two oldest bucks are used to this pasture and can show the new arrivals around. That is a plus. The next morning after I fed the babies, I left the pig pen gate open. We thought we would let them out to graze during the day, but pen them up each night for a while. I left them eating and wished them a good day.

When I came back in the evening to feed, all four of the babies were back in the pasture with their mothers! Hmmmmm……they came through the gate into the corral even though we had put 2 x 4 stock panel over the bottom two openings. We were surprised. So now I was facing the same sorting procedure with the babies again, which I was not looking forward to. As I stood there shaking my head at them it occurred to me that there is a much easier way to accomplish this task. Remember how I used the does to lure the babies into the pen when I wanted to pen them off at night to get more milk? This is one of those moments when you think, “Good grief! Why didn’t I think of that yesterday?? It would have saved me a lot of work!” So, this time I just opened up the gate to the pasture, called the does with a bucket of feed, walked around into the pig pen and everyone followed me. Wa-la! The babies were penned up. It was easy to walk each doe out since they are used to that behavior when I milk them. That was so much easier, too bad I didn’t think of it the first time.

So now, once again, the babies are penned up. I got five quarts of milk this morning. It won’t take long to get enough milk to start making cheese again. I hope to make some fresh mozzarella sometime this week. You know, all of this is a lot of work, but I wouldn’t trade it for the world. I am so grateful to live in a place that I still can live this way and do things the way I choose. I only pray that it continues to be so. In some places, for some people, the tide has already turned and the heavy hand of government restrictions are at their door. Be vigilant, be resourceful, and above all, be ready.