For the past month, Frank has been attending a CERT class. Community Emergency Response Team. Some of it has been a good review/refresher to some of the things we learned in our EMT training. This training involved five Thursday nights, one Tuesday night, and two all day Saturday classes, with this last week involving a Tuesday, Thursday and Saturday. He finished up this afternoon. In the midst of this class, he also attended a Tuesday evening storm spotter class, during another week that CERT was on a Thursday evening and all day Saturday. Now he only has his monthly county Communication Support Team meeting, which is next Tuesday evening. It has been a rather busy month for Frank in this respect. 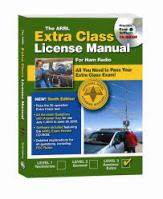 In the meantime, we have both been studying for our Amateur Extra Class license. This is the top level of ham radio licensure and is more involved and detailed than the Technician or General class license tests we’ve taken so far. We have been trying to put in an hour or two per day for our studies, but haven’t always been successful. There is an area ham fest coming up in about three and a half weeks where they will be administering licensing tests, but we’re not sure if we will be ready by then. It just depends on how much time we can devote to studying.

In the search for variety in our new low carb life style, I have come up with a new twist for egg salad. We have some Chevre cheese in the freezer we need to get eaten up, so I have been gradually thawing it out and experimenting with a ranch type of seasoning. Not long ago, Frank mentioned having egg salad. I have to admit, my egg salad has always left something to be desired. Like flavor. Well, this time I chopped up six boiled eggs and added a few spoonfuls of the ranch flavored Chevre, along with a little mayo and bacon bits. It’s actually pretty good for a change.

We had been crossing our fingers in hopes that the hay in the barn would last long enough for the snow to melt, and it did, just barely. So yesterday we cleaned the last of the old bale out and moved another large round bale into the barn. We shouldn’t need to feed much of it now that the temperatures are rising and the grass is beginning to grow. But we will need it in about three weeks when Penny, Cricket and Lady Bug kid.

The other thing we needed hay for is the ‘baby pen’ where we pen up the kids at night, so we can milk the does in the morning. This will keep the babies from nursing in the night and will probably give us almost a

gallon of milk a day. After I finish milking, I let the babies out so they can have their breakfast. We planned to start penning the babies up a couple of weeks ago, but then went into temperatures in the teens and low 20’s at night and decided to wait until the weather was a little more cooperative. So, today 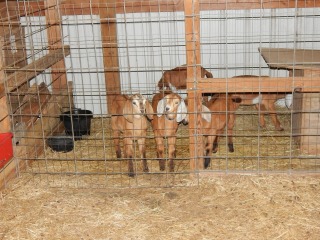 while Frank was finishing up his CERT class, I finished cleaning out and setting up the baby pen. I didn’t take one picture, though, so this is what it looked like last year when we penned up Penny, Cricket and Lady Bug when they were babies. When we did the chores tonight, we penned up Patch, Breakfast, Buttons and Lunch. Surprisingly, they didn’t do much complaining while we were still in the barn finishing up, but I expect they will be complaining in the morning when I go to milk.

I also moved the ‘garden’ outside today while Frank was gone. The weather was gorgeous with light winds, sunshine and temperatures in the 60’s for most of the day. 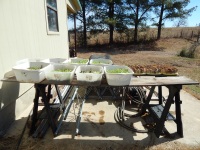 We will leave the seedlings on the south side of the house in the sun during the day, and move them onto the west porch in the evenings when the temperatures are predicted to be in the middle 30’s just in case of frost.

All of the seedlings so far are cold hardy, so they should be just fine. As long as the kittens stay out of them, that is. I’ll have to keep my fingers crossed on that one.

While I was at it, I planted another 40 paper pots with carrots and 40 with beets. Now that the south window in the house is empty, it’s time to start the tomato and pepper seedlings. Maybe I can get to that tomorrow afternoon after church.

That’s what we’ve been up to. We have been very grateful for some sunny, warmer days. The weeks of long, gray, cold, dreary days were really beginning to wear on me. They always do. Just looking out the window at the sunshine can make my day, and it’s even better when I can be outside playing in the dirt. 14 more days until spring. We hope you’ve had a good productive week. It always makes you feel good when you can get something done, even if it’s just the little things. Thank you for taking the time to read.